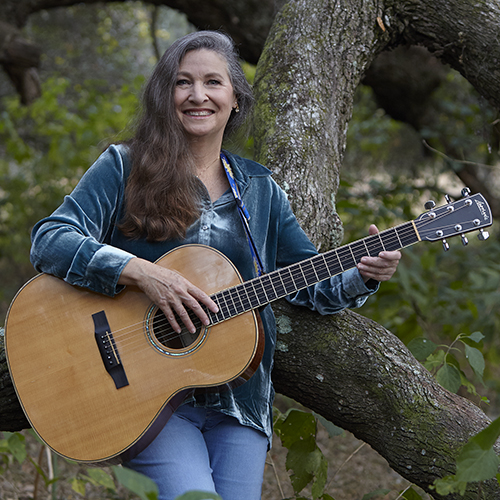 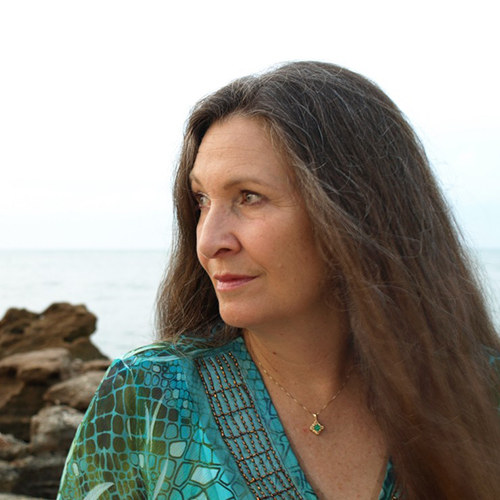 With her newest release, REACH FOR THE STARS (2017), Elaine Mahon has written a collection of songs that reflect her perspective as an astronomer, while remaining deeply rooted in the natural world we all live in. Elaine employs alternate tunings on her guitar to create a rich harmonic palette for the melodies of her songs which often take unexpected, yet pleasing turns. Add to that a sweet, resonant voice capable of expressing a wide range of emotion and you have a winning combination. Victoria Parks of WGRN in Columbus, Ohio sums it up by saying: “Elaine writes honest folk songs with an uncommon, simple beauty.”

Elaine performs solo at festivals, venues and house concerts in Florida and throughout the Southeastern US. Mahon lives with her husband in Gainesville, Florida where she is founder and director of the Sandhill Stage acoustic music series which benefits two land conservation non-profits: Alachua Conservation Trust and Conservation Burial, Inc.

With her newest release, REACH FOR THE STARS (2017), Elaine Mahon has written a collection of songs that evoke a sense of wonder while inspiring hope and offering empowerment. Mahon’s songs reflect her perspective as an astronomer, while remaining deeply rooted in the natural world we all live in.

Elaine has played twice at our House Concert series. She was a hit both times. Elaine has written some absolutely wonderful songs, especially “Rise Up Singing” and “Dust Tracks in the Road.” All of her songs ring true with personal feelings, and her beautiful soprano voice harkens us back to the richest years of Judy Collins and Joni Mitchell. But her art is her own, not borrowed. Her last album, “Rise”, is one stunning piece of work and I’m close to wearing out my copy. Elaine also is a very warm and personable performer, sharing many stories about herself and her loved ones. We will have Elaine back to our place as often as she and schedule allow. – Dale Evans Swan (The Swan House Concert Series)

Mahon has fulfilled all my expectations for yet another artistically masterful collection of original songwriting. With every track on Reach for the Stars, jazzy, folky, hauntingly beautiful vocal melodies and harmonies nurture the soul. Reach for the Stars is, at the least, worth multiple listens and is deservedly, at best, on the forever playlist. Reach for the Stars should be on every folk deejay’s playlist in 2017. It is my hope that Elaine Mahon continues to write these wonderful songs. I want to keep sharing them with the world. [READ FULL REVIEW HERE] – Victoria Parks, Host of Folkin’ Around with Victrola, WGRN Columbus

Maura Kennedy of THE KENNEDYS

We are listening to your wonderful album, “Rise” in the car. Your voice is simply gorgeous!! So liquid and pure. Just got through the first two songs so far and your tone and the evenness of it across your register is so striking.  You have all the best vocal qualities of Mary Black, and that’s an extremely high compliment coming from me. I love your song writing too. It’s really classic stuff. “Rise Up Singing” is a perfect sing-along, (may I sing harmony with you sometime?) And “Harvey’s Song” reminds me of the best of the Irish ballads, a la “Anachie Gordon” and the like. Can’t wait to hear the rest of it. – Maura Kennedy of THE KENNEDYS.

It comes through loud and clear that Elaine Mahon put her heart and soul into RISE. Combining themes of nature, personal family history, and self exploration with melodic, lush arrangements, this recording exudes a commitment to letting her songbird sing! In a cluttered, noisy world, “Rise” is a musical mediation that sets its compass towards the sacred and offers a much needed walk through nature, offering rest from the struggle and a vivid reminder of the beauty that abounds.” – Joe Crookston – Performing Singer & Songwriter

Elaine Mahon’s new CD RISE is a powerful contribution to the tradition of the singer-songwriter.  There’s not a weak point here:  her voice, which sounds most like a young Judy Collins, is strong and full of conviction in the low range and pure and sweet in the upper register.  The harmonies blend effortlessly, whether they are her own of those of a variety of backup singers, notably Penny Nichols and Elisabeth Williamson.  The songs themselves set gorgeous melodies to a wide range of topics, from Selkies and Native American myths to modern dreams and stories, a barbed-wire Jesus and a ’56 Chevy.  Elaine’s guitar work is delicate and unobtrusive but features some unusual tunings, and her backup musicians, all highly skilled, are tasteful throughout, always letting the spirit of the music itself dominate their individual performances.  Elaine Mahon has left us a generous gift of songs that evoke the very tangible stuff of our experience even as they transcend any easy interpretation.” –R. Brandon Kershner, Alumni Professor of English, University of Florida

I love Elaine Mahon’s voice and her ethereal arrangements. Dreamscape songs that touch the heart with whimsy and delight. To coin a phrase, “what could be better than that!” – Maggie Ferguson WXOU

….it takes a lot to make you happy, and Elaine Mahon’s album RISE does it with every note she sings. What makes this record great is her vocal range–she truly sings like bird.” –John Shelton Ivany JSITOP21.COM

Elaine may evoke a comparison to a young version of Judy Collins because of Elaine’s crystal clear voice over a tasteful acoustic instrumentation that is woven adeptly around her songs….Rise is a very relaxing and enjoyable listen.” – Freddy Celis – ROOTSTIME – BELGIUM

Elaine Mahon is channeling a deep spirit in her beautiful, enchanting, and moving songs. This is the most beautiful album I have heard in quite a while, every arrangement complements the song perfectly.  The vocals are rich and compelling.  I think you will treasure Elaine Mahon’s new CD, RISE for years to come” –Penny Nichols, multiple Grammy nominee

Elaine’s lyrics are lush landscapes, filled with imagery and details. Many of the songs give lilting accounts of historical events, and you will be drawn into each story. The songs also highlight Elaine’s love of Florida’s waterways resulting in moods varying from playful to restful, just like any nice day at the beach! This is a beautifully produced CD, with great arrangements and harmonies. Lovely stories, haunting melodies, woven with Elaine’s rich voice and a multitude of instruments make this an enticing CD to spend some time with.”-Sue Riley, emPower Music and Arts

Elaine’s voice is pure and beautiful, and mercifully it is prominently mixed on the lovely CD “Rise”. If you’re not totally absorbed (which would surprise this listener) don’t fail to notice her fine songwriting. There’s a lot to enjoy here.” –David Roth – Performing Singer & Songwriter