I hope you are having a wonderful summer. It has surely been  wet one this year. I am really looking forward to the cooler temperatures of Fall.

In April  I sang harmony with HuDost at the Joseph Saccocci Memorial Concert at Heartwood Soundstage.

Check out this video of HuDost’s song “Arrythmia.”
(Moksha Sommer on harmonium & vocals, Jemal Wade Hines on guitar, Chuck Mauk on drums, Mike Murphy on bass, Grace Mauk on keys and special guests Richy Stano on guitar)
Later that month I joined Christine Stay and Aidan Quinn of Friction Farm at the Winter Park Public Library for a show.  We had a lot of fun harmonizing with each other in our respective sets. Friction Farm just released their beautiful new CD  “So Many Stars”  and I urge you to check it out.

In May I had a great time playing the Gamble Rogers Folk Festival in St. Augustine.  The festival is settling into its beautiful new location in the Spanish quarter.  The main stage, underneath the giant oak tree bedecked with lanterns, is truly magical at night.

Also in May,  Susie Lyons hosted a wonderful house concert for me in her lovely place on Clear Lake, the neighborhood in which I grew up. Thank you Susie for sharing your home with so many for an evening of song.  My son, Sam, sang harmony on a few numbers and was so well received that we decided to play a set together at  Heartwood Soundstage in Gainesville, where we will be opening for Sam Pacetti.  Get your tickets early!

In July  Bob McPeek hosted the Mirror Image Retrospective show at Heartwood Soundstage, showcasing many of the Gainesville artists that had recorded at Mirror Image Studios over the past forty years. My first album SEAMLESS was recorded there more than twenty years ago, with Bob McPeek as guitarist, engineer and co-producer. What a long and wonderful night of music it was, and such a blast to be a part of it.

I am very excited to tell you that my son and I will be opening  for the incredible finger style guitarist Sam Pacetti at Heartwood Soundstage on Friday, Sept. 15th.  My son, Sam Mahon, will be accompanying me on acoustic guitar and harmony vocals. This will be our first show as an acoustic duo.   Sam Mahon is the lead singer, songwriter and guitarist for the power trio Xenogenesis.A fingerstyle guitar wizard, the headliner Sam Pacettiis a a wonderful songwriter and powerful performer.  Check out some of his videos here. Pacetti’s 1997 Waterbug debut, Solitary Travel, garnered critical raves. Dirty Linen, the influential US roots publication, opined, “Although the woods are full of young guitar virtuosos, few have developed the style, technique and artistic wisdom of Sam Pacetti. Solitary travel heralds the arrival of one of the most talented instrumentalists and composers to appear in acoustic music in a month of Sunday’s.”

This will be a night to remember so
Get your tickets early!

I will be joining Larry Mangum and Neil Dixon in Lake City, FL at the White Springs Folk Club for Larry Mangum’s Songwriter Circle.  Larry has one of the most gorgeous deep voices around – he can even hit low notes Johnny Cash style – and he writes great songs too.  I’m really looking forward to meeting Neil Dixon and hearing his songs for the first time!  So come on over Lake City for an entertaining evening of song.

REACH FOR THE STARS (released Feb 2017)  has been well received by DJs around the world, with songs charting high on Folk DJ Charts, Root Music Reports for Folk and Contemporary Folk, and KC Cafe Radio Charts.  Top charting songs have been “Lean into Love”, “Reach for the Stars” and “You Are Not Alone”, followed by “Rolling Home”, “Shadows Dancing”,  “Sweet Florida” and “Denali.”  To have so many songs receive significant airplay has been such a thrill for me.At first it surprised me that “Sweet Florida” received airplay at so many locations outside of Florida, and the US for that matter, but it just underscores how important water protection issues are around the world.

To top it off, several songs from my 2013 release RISE, in addition to songs from REACH FOR THE STARS have been featured on a number of WOMEN OF SUBSTANCE award winning podcasts.

You don’t have a copy of REACH FOR THE STARS yet? 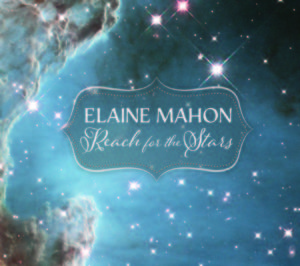 Reviews for REACH FOR THE STARS keep coming in from around the world.  Here are excepts from two of the most recent.

“Folk artist Elaine Mahon plays acoustic guitar and sings in a beautifully clear voice that grounds the 14 songs here. They span 50 minutes of concentrated listening and her message is one of positive energy in the universe and how blessed we are to be part of this magical mystery. With an academic background in extragalactic astronomy, this performer has penned songs of hope, joy and thanks for all the possibility that life puts in our path. ‘Shine,’ ‘You Are Not Alone,’ ‘Reach For The Stars,’ ‘Look Up’ and ‘Lean Into Love,’ give a flavour of the message in the words. There is real optimism and purpose to her writing and collaborations on three tracks make the acoustic feel of this release all the more inclusive. Earnest songs and performed from the heart.”  Paul McGee July 2017 issue of LonesomeHighway.com.

Excerpt from a Review (translated from Dutch) “In REACH FOR THE STARS (self-released) (Mahon) looks up and sees the galaxy and golden stars (“Look Up”). On the title number she reaches for the stars to handle the disappointments of life. The songs of the singer-songwriter from Florida are especially important to the heart. A folk singer of the purest water, her voice and folk style delivery is used to good effect. Pure. Like a star that radiates on its own power. Somewhere between Kate Wolf and The Indigo Girls she includes fourteen songs about universal affairs like love, family and nature. She not only looks up, but also down. To her surroundings, like Sweet Florida, where sharks and whales swim through her realm.”  – John Gjaltema of Altcountry.nl.

Most of you know that Sandhill Stage has resumed its concert series following the the one year hiatus I took to promote my album, and recover from a broken wrist (unplanned tennis misadventure.)  I am excited about the great lineup we have for the Fall. Our first show of the season was to a packed house!  What a joy to reconnect with a community of like-minded musically energized folk and to be a part of creating a beautiful experience for so many, while raising awareness of the two nonprofits that the concerts serve to benefit: Alachua Conservation Trust and Conservation Burial, Inc. To keep apprised of shows at Sandhill Stage sign up for the newsletter at sandhillstage@gmail.com

Thank you so much for reading, and for your continued support.  If you haven’t already, Please come join me on Facebook! I hope to take the leap into live video soon – so that’s where you’ll hear about it first.
Until next time, thanks for reading. Hope to see you at one of the shows coming up!
In Song,
Elaine Mahon