Winter is upon us as we leave 2017 behind and move forward into 2018. Many of you may know that my Dad, Arthur Forrest Camp, Jr.,  passed away suddenly right after Thanksgiving.  He was an amazing man in so many ways and even though we lived on opposite sides of the political fence, his love was unconditional.  A brilliant innovator and inventor my Dad was the guy we used to say we’d want to be with if there ever was a nuclear war.  He could build anything and found ways to work with whatever was available at the time.  He was a great role model for his perseverance, hard work, and creative problem solving.  He will be very much missed!

Three days after Dad left us, we drove up to North Carolina to play a house concert for the Swans.  Dale and Sarah Swan were marvelous hosts, as always, and it was a healing experience for my son and I to play together.  Thank you Dale and Sarah, and thanks to all of your wonderful friends that came out for the show!

After being a solo performer for so many years, it is such a thrill to perform with my son,  Sam Mahon.  He is a wonderful accompanist (acoustic guitar and vocal harmony) and we have fun working together.  Our practice time is a gift that I wouldn’t trade for anything in the world.  An amazing musician and songwriter in his own right, Sam fronts the power trio Xenogenesis as lead guitarist and lead singer.  His acoustic performance with me is necessarily toned down,  but if you ever want to really hear his vocal chops and some really cool songs you’ll need catch his band when they play clubs like the High Dive in downtown Gainesville (and don’t forget your earplugs!) If you enjoy rock music you’ll be in for a treat.  As a senior in Biochemistry at UF, he is a busy guy, but after he graduates we hope to find some time to compose together.

We have been busy working on arrangements for the songs we’ll be performing Feb. 11th at Sandhill Stage, when we open for Acoustic Eidolon.  Hannah Alkire (the cello component of Acoustic Eidolon) plans to join us too, which is a real treat.  Hannah’s cello can be heard on both of my albums: RISE (“Harvee’s Song”, “Rabbit Hole”, and “The Selkie Bride”);  and REACH FOR THE STARS (“Denali” and “Reach for the Stars”).  We are super excited about this show. 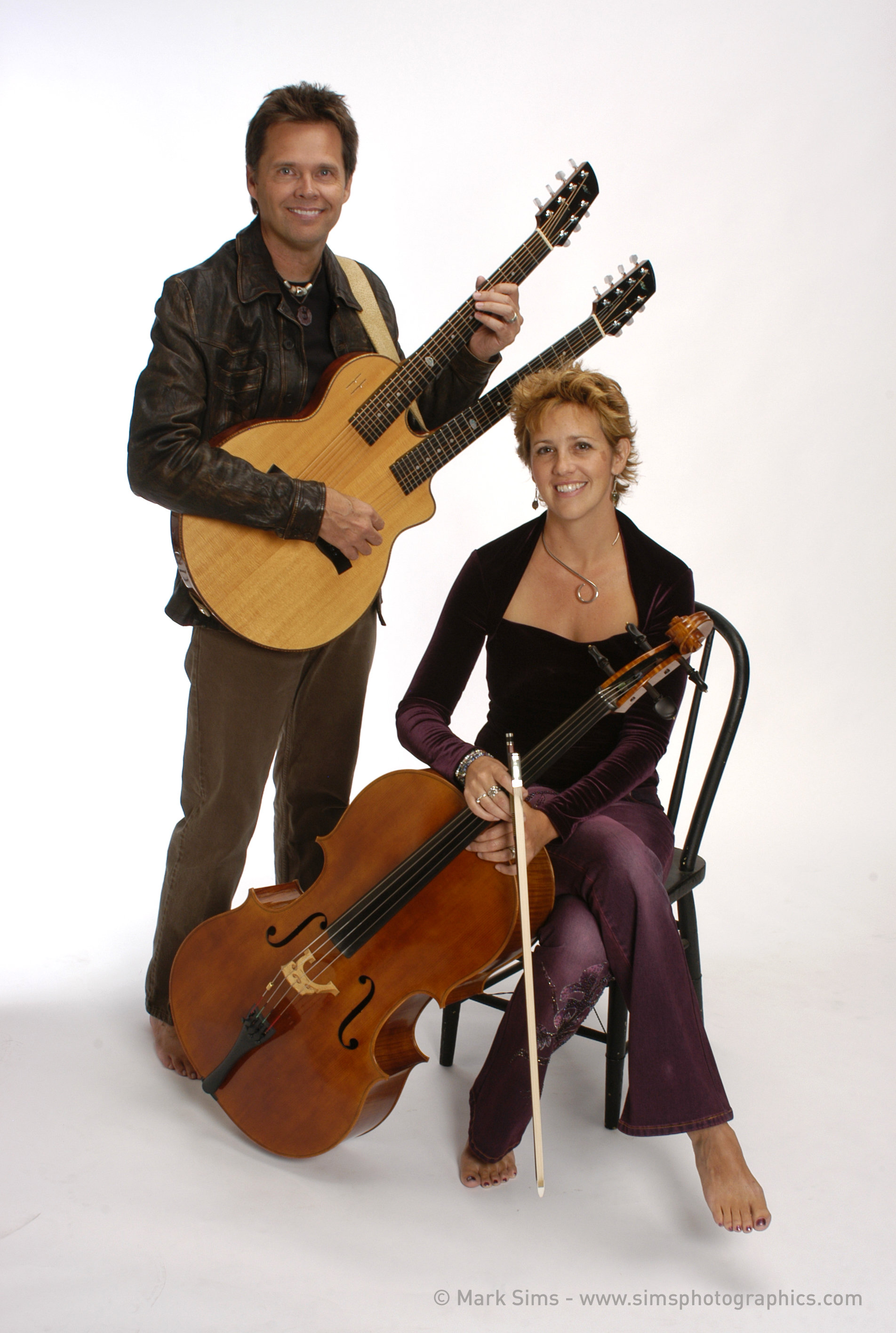 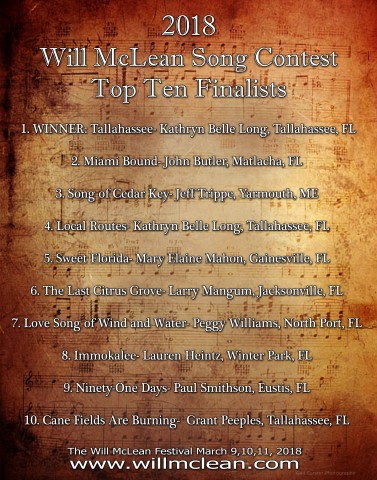 As you can see, my song “Sweet Florida” on REACH FOR THE STARS placed fifth in this year’s Will McLean Songwriting contest. Songs entered into this contest must feature Florida in some way and the top ten are all worth a listen! Congratulations to everyone on the list, as well as to all the other writers who wrote Florida songs.  I can’t think of a better way to share our love of this state than through music.  I don’t usually enter contests (music really shouldn’t be a competition), but I did want more people to hear “Sweet Florida”  which highlights the degradation of Florida’s waterways by polluters and high volume users.  In terms of natural beauty, North Florida is heaven as far as I’m concerned. The scenic beauty of our state is something we should never take for granted. We need to actively work to protect and preserve her natural resources; hence my work as coordinator at Sandhill Stage which benefits the conservation nonprofits Alachua Conservation Trust and Prairie Creek Conservation Cemetery.

I am also happy to announce that I will be playing the Will McLean Festival this March (9-11.) It is my favorite Florida festival. It  is way out in the woods and small enough to have an intimate feel. The performance schedule will be announced later.

Great news for REACH FOR THE STARS! It wound up in FOLK DJ’s Top 100 CD’s of the Year at No. 61 (in the top 10% of folk albums in 2017!) In addition, it was #37 for the year on Roots Music Report’s Contemporary Folk Chart.  A special thanks to all the DJs  that played songs from REACH FOR THE STARS on their shows both stateside (too many to list here) and around the world including the shows Folkal Point & For Folk’s Sake (UK radio), Highway 61 (Italy), Radio FM Goud (Belgium), Musik Fra Kyst Til Kyst (Denmark), Radio ZuSa & NBT Music Radio(Germany), Landslide & Blues and Friends (Netherlands), WRCF FM & Radio ISA (France), Midweek Music Miscellany (Ireland), Midnight Country (Luxembourg), and Mojo Alt (Macedonia.) A big shout out to Dave Hardy at Positively Charged Radio for continuing to keep REACH FOR THE STARS in their long term rotation – how cool is that?

To top it off, two songs have be selected to be included on award-winning Women of Substance Podcasts:  Feb 7th, Podcast #747 “She’s In Love”  from SEAMLESS and Feb 13, Podcast #751 “One by One” from RISE. Subscribe to the podcasts on YouTube or subscribe to podcasts on ITUNES.

You don’t have a copy of REACH FOR THE STARS yet?
PURCHASE A PHYSICAL COPY from my website, or
DOWNLOAD SONGS from Bandcamp. 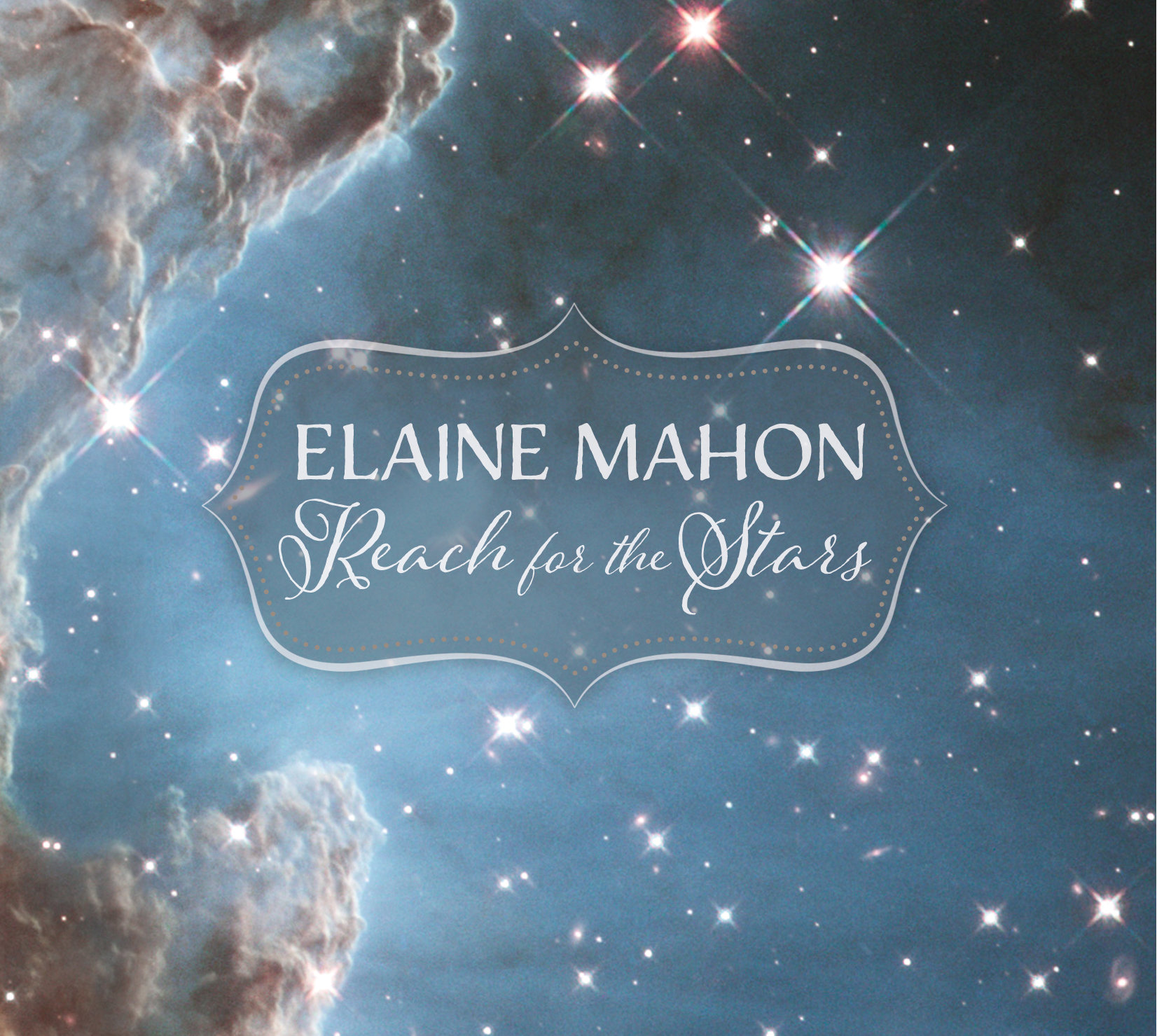 This past Fall I had the honor of teaching a six week songwriting course to an incredible group of talented women for the Sirens and Strings Guitar Academy (the brainchild of Kimberly LeCouteur.)  It was tremendous fun to help facilitate the creative talents of each of these remarkable women as they discovered and crafted their songs.  To be able to sing is a miracle in itself, but the empowerment that is unleashed during the songwriting process is quite a marvel to behold.  Thank you to each of these women for having the courage to allow me into their sacred creative space in order to help hone their songwriting process. We ended the course with a concert at Hoggetown Music.  So not only did they each write a song, but they performed it for an audience as well.  That takes guts – you rocked it gals!
****SANDHILL STAGE****
Since I resumed concerts at Sandhill Stage this Fall we have had great turnouts for each show:  Passerine (September), The New 76ers (October), The Krickets (November), Jack Williams (December), The Heather Pierson Acoustic Trio (January),  and Jacob Johnson and The Kennedys (February).  It is a privilege and a joy to bring such fine music to the good people of Gainesville while helping out two amazing nonprofit organizations at the same time: Alachua Conservation Trust and Conservation Burial, Inc. To keep apprised of shows at Sandhill Stage sign up for the newsletter at sandhillstage@gmail.com.
****WHAT NEXT****

I am entering a new phase of creativity and am beginning to work on piano as well as guitar.  And so, even though you might not hear from me for awhile, know that I am continuing with my work as a songwriter and rest assured that you will someday get to hear something new and different from this quarter. I deeply appreciate all of your support and hope that you too are finding ways to honor your own muse.  Don’t forget to take time to really enjoy life, for the gift of life is a precious one indeed.

Thank you so much for reading, and for your continued support.  If you haven’t already, Please come join me on Facebook!
Until next time, thanks for reading. Hope to see you at one of the shows coming up!